A Guide to Indian Cuisines Most Common Spices 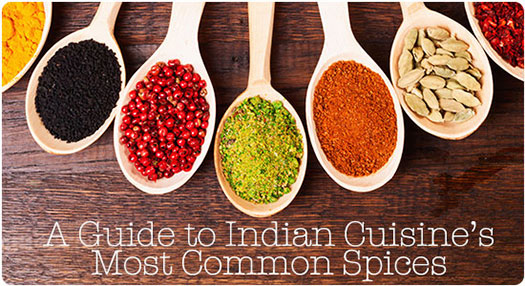 Indian cuisine is characterised by its unique, distinct dishes, each of which are packed full of magical flavours and individual features. It is the best food in the world, and made so thanks to its use of spices. Spices, or masala, are what gives Indian cuisine its full flavour and what make each dish different from the next. Contrary to what some people believe, the use of spices in authentic Indian food are not to make it fiery hot, but to add an intense, aromatic taste that makes the dishes so popular the world over. While spice choices are vast and varied, used for numerous purposes across different cultures, there are some that are used regularly in Indian cooking. The spices in this guide are used widely across the world and readily available to add authenticity to your meals.

Native to the deserts of Iran and the mountains of Afghanistan and cultivated in India, asafoetida (Hing) is the dried latex exuded from the rhizome of the perennial herb, ferula. Possessing a potent flavour, this spice delivers a smooth taste similar to that of a leek and works great in lentil curries and vegetarian dishes such as Babycorn with Dal.

Caraway (carum carvi) is a biennial plant in the family Apiaceae. The spice is used in a wide variety of deserts and liquors, but its pungent, anise-like flavour is best harnessed in dishes such as pulaos and biryani.

Cardamom is available in black and green spices, each of which offers different qualities. Green cardamom (choti elaichi) is the seeds taken from cardamom pods and used whole or in powder form in numerous Indian dishes. Meat, vegetable, rice, and desert recipes rely on the sweet, strongly rounded taste of green cardamom, and the ingredient is important in garam masala. Black cardamom (kali elaichi) comes from one of two species in the family Zingiberaceae and delivers a smoky, liquorice taste. A little goes a long way with this spice and the intense flavour is used as a secret ingredient in many different curries.

Named after a city in French Guiana, Cayenne is used as a powder or in whole pepper form in numerous spicy Asian dishes. A key ingredient in hot sauce, particularly those that are vinegar-based, the pepper brings a fiery element to dishes, often regarded for its health benefits.

Popular in deserts, cinnamon (dalchini) sticks are toasted in oil and used to impart a spicy sweetness in savoury dishes such as lamb bhuna.

Cloves (laung) are used in a similar way to cinnamon and toasted in oil to add a powerful taste to dishes. Eighty-five per cent of cloves' taste comes from the chemical eugenol; the spice should be used sparingly to avoid altering the taste of a dish.

Coriander (dhania) is a real workhorse of a spice. Famed for its nutty, orange taste, this dried fruit of the cilantro plant is mild, but packed full of flavour. Coriander can be used whole or ground and is a key spice in garam masala and Indian curries that use cumin, such as chicken tikka masala.

A spice mix of wide varying composition, curry powder, a collection of spices known as garam masala, is not to be confused with the British use of the word 'curry'. Many traditional curry powder recipes include coriander, turmeric, cumin, fenugreek, and chili peppers, with additional spices such as asafoetida, fennel seed, caraway, cinnamon, clove, mustard seed, green cardamom, black cardamom, nutmeg, long pepper, garlic and ginger also used depending on the recipe.

Cumin (jeera) adds a range of flavours to dishes depending on the way it is used. Fried whole in oil, it brings a sweet, smoky flavour, while in powder form a savoury taste, similar to that of Mexican dishes, is prominent.

Wonderfully rich and bittersweet in taste, fenugreek (methi) can be served as a condiment or fried to flavour a whole pot of lamb madras.

One of the few pre-mixed spices used in Indian cuisine, garam masala is made up of a wide variety of ingredients. A typical version of this spice includes turmeric, black and white peppercorns, cloves, cinnamon, cumin seeds, and black and green cardamom pods. The order in which garam masala spices are added to dishes is, in some cases, very elaborate.

A species of the onion genus, Allium, garlic is widely used in everything from tomato curry to chicken jalfrezi for its pungent flavour. It is also a popular condiment.

Ginger, particularly in ground-dried form (sont), possesses an amazingly warm spicy flavour that is prominent when sprinkled into dishes during cooking. Ginger is an essential ingredient of chicken vindaloo.

Mace (javitri) is the outer covering of the nutmeg nut and possesses similar sweet sensory qualities. A little more delicate than nutmeg in its flavour, mace is preferred in lighter sweet and savoury dishes and imparts a beautiful orange hue.

The other spice derived from the Myristica genus, nutmeg (jaiphal) is used mostly in ground form in biryani dishes to add a sweet taste.

Made from dried groundnuts of the chilli pepper family, paprika is one of the ten ground spices needed for basic Indian cooking and is used in several curry and tandoori mixes. Ranging in colour from red to brown and taste from mild and sweet to smoky and spicy, the woody, earthy aroma of the spice adds a mild flavour to a dish.

Cooking Indian food is an enjoyable, sensory experience that is quick and simple. Using your collection of spices, you can enjoy a variety of dishes and revel in the truly authentic taste.